Performative reading, duration 10 min
Sitting on top of an abandoned safe called LIPS at the former French Institute in Amsterdam, looping a yarn around my left-hands five fingers to produce a continuous knotted string and reading a fantasised biography of Princesse Marie Bonaparte.

Performed on 13th of March 2021 during the exhibition Freed from Desire at Reneenee, Amsterdam

Thanks to Cécile Tafanelli & Roman Tkachenko for inviting me,
and to Séverine Amsing for lending me her amazing cones of yarns ♥

In her bedroom layered with dazzling textiles, we find a young Marie Bonaparte quietly sitting on a velvet-upholstered ottoman. Her upper body is blurred by translucent and delicate lace; the virginal garment hardly distinguishable from her alabaster skin. She is slightly bent towards a round piece of stretched canvas, the incarnation of a perfect figure of concentration, peaceful and subdued. Peeking at her in this moment, it might not surprise you much to hear that the little girl is the sole inheritor of an outstanding fortune her grandfather made on the irrepressible desire men have for gambling. Her right hand is holding a needle, which carries a filament of flesh coloured yarn. Her left hand is firmly clenched over a wooden frame, clamping tight a thin woven fabric. She pierces the textile from beneath, and each time finds herself surprised at the sight of the sharp metal pointing back in her direction. Subjugated, she repeats the same action over and over again. Stitch after stitch after stitch, her mind drifts from the embellishment pattern to the titillating sound of the needle perforating warp and weft, back and forth. Inexplicably blushing, she interrupts her labour, just before pricking her own finger.

“By the end of the century, Freud was to decide that constant needlework was one of the factors that ‘rendered women particularly prone to hysteria’ because day-dreaming over embroidery induced ‘dispositional hypnoïd states’.” (1)

You might not know Marie Bonaparte, despite her bearing the name of an emperor. She is one of these female characters whose place in History would remain forced in the shadow at best; mocked and ridiculed, at worst. Focused since childhood on her genitalia, she dedicates her adult life to understanding unexplored charts of the female orgasm; a life quest summarized as a perpetual search for volupté. You may kindly smile learning that she suffers from chronicle frigidity. It might nevertheless horrify you to hear that, despite strong warnings, she ventures towards experimental treatment of her sexual dysfunction, surgically relocating her clitoris closer to her vagina. Perhaps a modern map of this mysterious appendix, charting its nervous roots extending below her other lips and across her inner thighs, would have suffice to discourage her.

I spill phonetic slips
From my wretched lips
to lisp over futile bliss.

Married to the royal family of Greece, Marie quickly figures out that her and her husband both prefer the vigor of other men. Despite its coldness, her marriage gives Marie the lofty title of princess Bonaparte, and allows her to rejoice in numerous affairs. She develops a pronounced taste for men operating in the science realm and the ones exulting political power. Triggered by the lasting frustration of her frigid condition, Marie Bonaparte seeks therapy from none other than Sigmund Freud himself.

Laying on the Viennese couch covered by a thick oriental rug, Marie’s eyes wander through entangled geometrical symbols; following the contour of a shape one could read as a comb with sharp rectangular teeth, she is suddenly shaken by the choking vision of a candelabra stuffed deep in her throat.

Ten years of arduous psychoanalysis leads her to unravel a potential childhood trauma caused by witnessing the lips of her nanny hastily sliding over her uncle’s stiff genitalia. Bones, haunt Marie in many forms; a skull of the decapitated murderess of a French revolutionair, exhibited in her father’s study room, recurrently inhabits her dreams; the lipless jaws threatening her for a revengeful bite.

Harvesting knowledge from its source, she soon puts her wit and intellectual curiosity to become a strong figure of the psychoanalysis movement, and generously funds its wave across western Europe.

Beyond the Pleasure Principle,
Ego is the iceberg tip
the visible mount of consciousness.
Below the surface
hides a vast massa called Id,
lump of unconscious immensity.
There is possibly a certain irony
in the choice of such a chilling analogy,
when a clitoris shares a similar topography.

Woman and intellectual of enormous wealth, privileges, power, influence and freedom to explore, Marie Bonaparte remains an ambiguous figure and ambivalent thinker, reflection of the heavily racialized interwar period, marked as well by a crisis of Masculinity and gender. Her unconditional fervor for Freud, considered by some as the most dangerous misogynist of modern times, costed her to be banned from most feminist legacy.  Yet, “what is striking about her attempt to mediate her phallic self-perception is precisely that she did not accept Freud’s account. Rather, she carved out her own peculiar vision of the social place of feminine sexuality, indefatigably pursuing the pleasure she felt she lacked and to which she had a right”. (2)

Riddled with extraordinary contradictions, her idiosyncratic approach to unearth and research sexuality, which she tested and challenged through her own body with unique weirdness, could also be read as a clumsy first draft of reconciliation between feminine and masculine components of one’s being, perhaps a promise of advocacy and desire of fluidity between outer and inner forms of pleasure.

We might now cheekily speculate together on how Marie Bonaparte mesmerizes future French president Francois Mitterand during the coronation of Elisabeth II. Hearing him yawn in the background of the lengthy ceremony, she distracts him with a well-known tale of another Sleeping Beauty. Whispering in conniving confidence, she reminds him first of how an evil witch curses a young princess to puncture her finger on the needle of a spinning wheel, and forces her to fall into a deep slumber. With a hypnotic voice, she guides him to fathom this needle as a displaced phallus, a female clitoris, and spells out for him how the patriarchal tale formed subliminal fear in many little girl’s psyche to forbid them to pleasure themselves.

Is it why
I am so inclined
to handle needles and yarns?
Gently entwine
a thread arounds my fingers,
and twist
until my skin shivers. 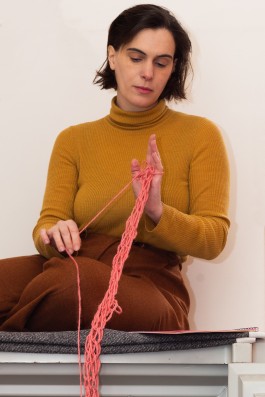 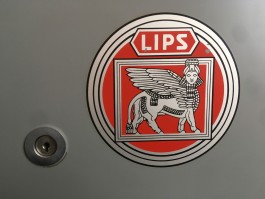 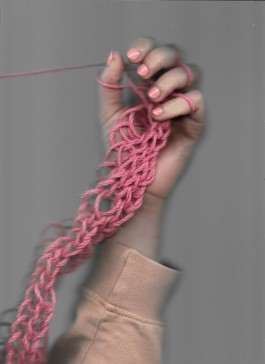