A mycorrhiza (from Greek μύκης mýkēs, "fungus", and ῥίζα rhiza, "root"; pl. mycorrhizae, mycorrhiza or mycorrhizas) is a symbiotic association between a fungus and a plant. The term mycorrhiza refers to the role of the fungus in the plant's rhizosphere, its root system. Mycorrhizae play important roles in plant nutrition, soil biology and soil chemistry.

A mycorrhiza is a symbiotic association between a green plant and a fungus. The plant makes organic molecules such as sugars by photosynthesis and supplies them to the fungus, and the fungus supplies to the plant water and mineral nutrients, such as phosphorus, taken from the soil. Mycorrhizas are located in the roots of vascular plants, but mycorrhiza-like associations also occur in bryophytes and there is fossil evidence that early land plants that lacked roots formed arbuscular mycorrhizal associations. Most plant species form mycorrhizal associations, though some families like Brassicaceae and Chenopodiaceae cannot. Different forms for the association are detailed in the next section. The most common is the arbuscular type that is present in 70% of plant species, including many crop plants such as wheat and rice.

Mycorrhizal fungi form a mutualistic relationship with the roots of most plant species. In such a relationship, both the plants themselves and those parts of the roots that host the fungi, are said to be mycorrhizal. Relatively few of the mycorrhizal relationships between plant species and fungi have been examined to date, but 95% of the plant families investigated are predominantly mycorrhizal either in the sense that most of their species associate beneficially with mycorrhizae, or are absolutely dependent on mycorrhizae. The Orchidaceae are notorious as a family in which the absence of the correct mycorrhizae is fatal even to germinating seeds.

Recent research into ectomycorrhizal plants in boreal forests has indicated that mycorrhizal fungi and plants have a relationship that may be more complex than simply mutualistic. This relationship was noted when mycorrhizal fungi were unexpectedly found to be hoarding nitrogen from plant roots in times of nitrogen scarcity. Researchers argue that some mycorrhizae distribute nutrients based upon the environment with surrounding plants and other mycorrhizae. They go on to explain how this updated model could explain why mycorrhizae do not alleviate plant nitrogen limitation, and why plants can switch abruptly from a mixed strategy with both mycorrhizal and nonmycorrhizal roots to a purely mycorrhizal strategy as soil nitrogen availability declines. It has also been suggested that evolutionary and phylogenetic relationships can explain much more variation in the strength of mycorrhizal mutualisms than ecological factors.

In this mutualism, fungal hyphae (E) increase the surface area of the root and uptake of key nutrients while the plant supplies the fungi with fixed carbon (A=root cortex, B=root epidermis, C=arbuscle, D=vesicle, F=root hair, G=nuclei).

The mycorrhizal mutualistic association provides the fungus with relatively constant and direct access to carbohydrates, such as glucose and sucrose. The carbohydrates are translocated from their source (usually leaves) to root tissue and on to the plant's fungal partners. In return, the plant gains the benefits of the mycelium's higher absorptive capacity for water and mineral nutrients, partly because of the large surface area of fungal hyphae, which are much longer and finer than plant root hairs, and partly because some such fungi can mobilize soil minerals unavailable to the plants' roots. The effect is thus to improve the plant's mineral absorption capabilities.

Unaided plant roots may be unable to take up nutrients that are chemically or physically immobilised; examples include phosphate ions and micronutrients such as iron. One form of such immobilization occurs in soil with high clay content, or soils with a strongly basic pH. The mycelium of the mycorrhizal fungus can, however, access many such nutrient sources, and make them available to the plants they colonize. Thus, many plants are able to obtain phosphate, without using soil as a source. Another form of immobilisation is when nutrients are locked up in organic matter that is slow to decay, such as wood, and some mycorrhizal fungi act directly as decay organisms, mobilising the nutrients and passing some onto the host plants; for example, in some dystrophic forests, large amounts of phosphate and other nutrients are taken up by mycorrhizal hyphae acting directly on leaf litter, bypassing the need for soil uptake. Inga alley cropping, proposed as an alternative to slash and burn rainforest destruction, relies upon mycorrhiza within the root system of species of Inga to prevent the rain from washing phosphorus out of the soil.

In some more complex relationships, mycorrhizal fungi do not just collect immobilised soil nutrients, but connect individual plants together by mycorrhizal networks that transport water, carbon, and other nutrients directly from plant to plant through underground hyphal networks. 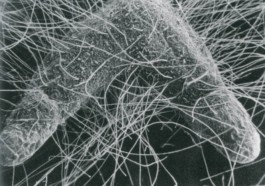