Cleaning symbiosis is a mutually beneficial association between individuals of two species, where one (the cleaner) removes and eats parasites and other materials from the surface of the other (the client). Cleaning symbiosis is well-known among marine fish, where some small species of cleaner fish, notably wrasses but also species in other genera, are specialised to feed almost exclusively by cleaning larger fish and other marine animals. Other cleaning symbioses exist between birds and mammals, and in other groups.

Cleaning behaviour was first described by the Greek historian Herodotus in about 420 BC, though his example (birds serving crocodiles) appears to occur only rarely.

The role of cleaning symbioses has been debated by biologists for over thirty years. Some believe that cleaning represents selfless co-operation, essentially pure mutualism, increasing the fitness of both individuals. Others such as Robert Trivers hold that it illustrates mutual selfishness, reciprocal altruism. Others again believe that cleaning behaviour is simply one-sided exploitation, a form of parasitism.

Cheating, where either a cleaner sometimes harms its client, or a predatory species mimics a cleaner, also occurs. Predatory cheating is analogous to Batesian mimicry, as where a harmless hoverfly mimics a stinging wasp, though with the tables turned. Some genuine cleaner fish, such as gobies and wrasse, have the same colours and patterns, in an example of convergent evolution. Mutual resemblance among cleaner fish is analogous to Müllerian mimicry, as where stinging bees and wasps mimic each other. 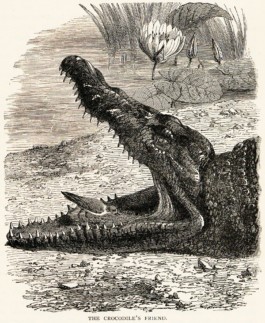 Herodotus asserted that the trochilusbird, possibly a sandpiper, was able to enter the mouth of the Nile crocodile in what would now be called a cleaning symbiosis. Drawing by Henry Scherren, 1906