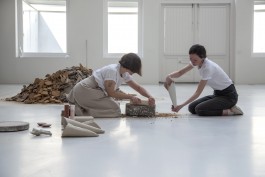 ‘Shelf-life’ is a term widely used to imply the longevity of commodities or the time-frame between the production and expiration of goods. In this one-day performance created specifically for Looiersgracht 60, Khurtova and Bourlanges pay special attention to the notion of the “afterlife of archives”; instead of keeping the archive preserved from changes to endure time, their approach embraces its living potential, finding new purposes and continuity. In this transient performance where archival elements are created, fragmented, shelved, and erased, viewers delve into the duality of the interpretation of the ‘archive,’ whereby the need to preserve clashes with the desire to keep something alive. 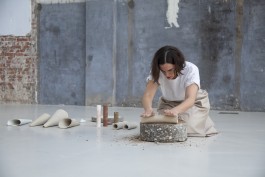 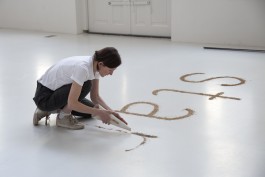 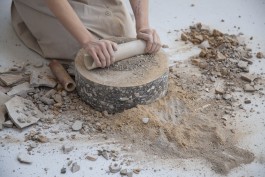 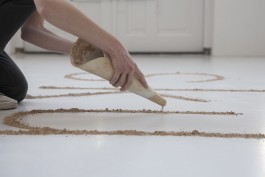 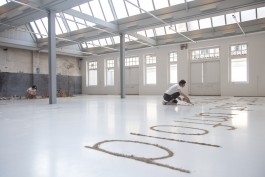 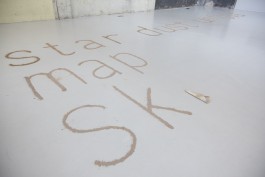 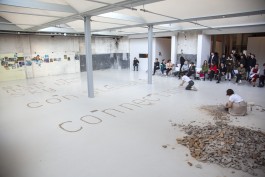 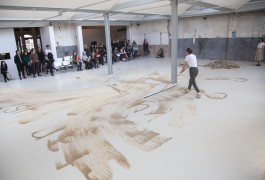 The performance was accompanied by a lecture by Alena Alexandrova, a cultural theorist and independent curator, and a conversation between her and the duo wherein they discussed what it means for artists to intervene with existing archives and how archives that have been ‘shelved’ can be kept alive. 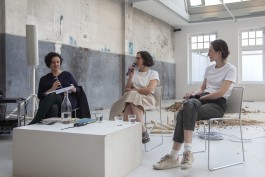 The duo takes, as a starting point of this exercise, the anecdotal story of the archives of Jacques Bourlanges (grandfather of Marie Ilse Bourlanges), which, through a series of oddly times co-incidences found itself in the storage containers of Archives Nationales- an honour generally reserved for institutionally recognised relics of utmost importance. Jacques’ archives despite not being officially part of the Archives Nationales, by simply residing in the institution’s boxes, inherited a lofty position- and it was in these boxes that Khurtova and Bourlanges found them. This pivotal incident spurred the artists to ponder and re-evaluate the mechanisms at work which give things historical meaning and importance and led them to develop methodologies which would be frowned upon by institutionalist archivists as destructive but in fact help to prolong the ‘Shelf-life’ of the archives. 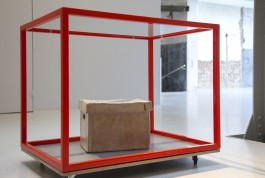 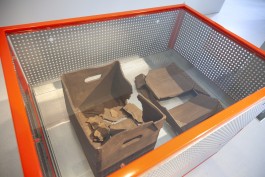 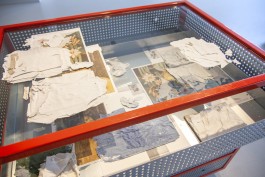 In each of the four vitreous structures dotted around the space, Khurtova and Bourlanges present us with relics of such an archive, but not in the conventional sense of the word. Whilst one structure displays an exact replica of the boxes of Jacques Boulanges rendered in clay which upon firing, exploded and was ergo destroyed, another vitrine contains paper thin shreds of porcelain which were created by casting pages from Jacques’ notebooks in clay and then being fired, resulting in the permanent loss of the pages themselves but the petrification of the casts.

Through such explorations of the urges to preserve that ultimately destroy, to the destruction of the source in order to create something new, to tampering with things so they remain the same forever, from artists’ books that fade in sunlight to terracotta boxes that ultimately turn to dust and consequently back into clay, within the vitreous structures of the Looiersgracht 60’s archive, the duo explore what it means to archive an already archived archive, continually reconfiguring the meaning of the words ‘archive,’ ‘permanence’ and ‘history’.