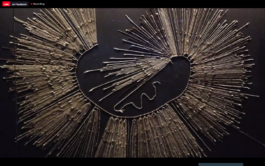 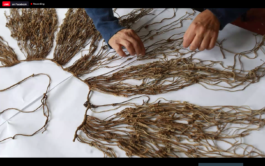 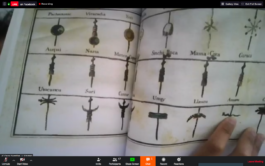 Quipu (also spelled khipu) are recording devices fashioned from strings historically used by a number of cultures in the region of Andean South America. Knotted strings were used by many other cultures such as the ancient Chinese and native Hawaiians, but such practices should not be confused with the quipu, which refers only to the Andean device.

A quipu usually consisted of cotton or camelid fiber strings. The Inca people used them for collecting data and keeping records, monitoring tax obligations, properly collecting census records, calendrical information, and for military organization. The cords stored numeric and other values encoded as knots, often in a base ten positional system. A quipu could have only a few or thousands of cords. The configuration of the quipus has been "compared to string mops." Archaeological evidence has also shown the use of finely carved wood as a supplemental, and perhaps more sturdy, base to which the color-coded cords would be attached. A relatively small number have survived.

Objects that can be identified unambiguously as quipus first appear in the archaeological record in the first millennium AD. They subsequently played a key part in the administration of the Kingdom of Cusco and later Tawantinsuyu, the empire controlled by the Inca ethnic group, flourishing across the Andes from c. 1100 to 1532 AD. As the region was subsumed under the invading Spanish Empire, the quipu faded from use, to be replaced by European writing and numeral systems. However, in several villages, quipu continued to be important items for the local community, albeit for ritual rather than practical use. It is unclear as to where and how many intact quipus still exist, as many have been stored away in mausoleums.

Quipu is the Spanish spelling and the most common spelling in English. Khipu (pronounced [ˈkʰɪpʊ], plural: khipukuna) is the word for "knot" in Cusco Quechua. In most Quechua varieties, the term is kipu.

"Quipu" is a Quechua word meaning "knot" or "to knot". The terms "quipu" and "khipu" are simply spelling variations on the same word. "Quipu" is the traditional Spanish spelling, while "khipu" reflects the recent Quechuan and Aymaran spelling shift.

"The khipu were knotted-string devices that were used for recording both statistical and narrative information, most notably by the Inca but also by other peoples of the central Andes from pre-Incaic times, through the colonial and republican eras, and even – in a considerably transformed and attenuated form – down to the present day." Archaeologist Gary Urton, 2003.

Most information recorded on the quipus consists of numbers in a decimal system, such as "Indian chiefs ascertain[ing] which province had lost more than another and balanc[ing] the losses between them" after the Spanish invasion. In the early years of the Spanish conquest of Peru, Spanish officials often relied on the quipus to settle disputes over local tribute payments or goods production. Quipucamayocs (Quechua khipu kamayuq "khipu specialist", plural: khipu kamayuqkuna) could be summoned to court, where their bookkeeping was recognised as valid documentation of past payments.

Some of the knots, as well as other features, such as color, are thought to represent non-numeric information, which has not been deciphered. It is generally thought that the system did not include phonetic symbols analogous to letters of the alphabet. However Gary Urton has suggested that the quipus used a binary system which could record phonological or logographic data. His student Manny Medrano has gone further to find quipus that decode to match census data.

The lack of a clear link between any indigenous Peruvian languages and the quipus has historically led to the supposition that quipus are not a glottographic writing system and have no phonetic referent. Frank Salomon at the University of Wisconsin has argued that quipus are actually a semasiographic language, a system of representative symbols – such as music notation or numerals – that relay information but are not directly related to the speech sounds of a particular language. The Khipu Database Project (KDP), begun by Gary Urton, may have already decoded the first word from a quipu–the name of a village, Puruchuco–which Urton believes was represented by a three-number sequence, similar to a ZIP code. If this conjecture is correct, quipus are the only known example of a complex language recorded in a 3-D system.

Most recently, Sabine Hyland has made the first phonetic decipherment of a quipu, challenging the assumption that quipus do not represent information phonetically. After being contacted by local woman Meche Moreyra Orozco, the head of the Association of Collatinos in Lima, Hyland was granted access to the epistolary quipus of San Juan de Collata. These quipus were exchanged during an 18th century rebellion against the Spanish government. A combination of color, fiber and ply direction leads to a total of 95 combinations in these quipus, which is within the range of a logosyllabic writing system. Exchanging information about the rebellion through quipus would have prevented the Spanish authorities from understanding the messages if they were intercepted, and the Collata quipus are non-numeric. With the help of local leaders, who described the quipu as "a language of animals", Hyland was able to translate the names of the two ayllus, or family lineages, who received and sent the quipu. The translation relied on phonetic references to the animal fibers and colors of the relevant quipu cords. Future research will attempt to determine whether Hyland's findings are applicable to quipus from the Inca period and earlier.