In ancient Roman religion and myth, Janus (/ˈdʒeɪnəs/ JAY-nəs; Latin: IANVS (Iānus), pronounced [ˈjaːnʊs]) is the god of beginnings, gates, transitions, time, duality, doorways, passages, and endings. He is usually depicted as having two faces, since he looks to the future and to the past.

Janus presided over the beginning and ending of conflict, and hence war and peace. As a god of transitions, he had functions pertaining to birth and to journeys and exchange, and in his association with Portunus, a similar harbor and gateway god, he was concerned with travelling, trading and shipping.

God of beginnings and passages

His function as god of beginnings has been clearly expressed in numerous ancient sources, among them most notably Cicero, Ovid, and Varro. As a god of motion, Janus looks after passages, causes actions to start and presides over all beginnings. Since movement and change are interconnected, he has a double nature, symbolised in his two headed image. He has under his tutelage the stepping in and out of the door of homes, the ianua, which took its name from him, and not vice versa. Similarly, his tutelage extends to the covered passages named iani and foremost to the gates of the city, including the cultic gate of the Argiletum, named Ianus Geminus or Porta Ianualis from which he protects Rome against the Sabines. He is also present at the Sororium Tigillum, where he guards the terminus of the ways into Rome from Latium. He has an altar, later a temple near the Porta Carmentalis, where the road leading to Veii ended, as well as being present on the Janiculum, a gateway from Rome out to Etruria.

The connection of the notions of beginning (principium), movement, transition (eundo), and thence time was clearly expressed by Cicero. In general, Janus is at the origin of time as the guardian of the gates of Heaven: Jupiter himself can move forth and back because of Janus's working. In one of his temples, probably that of Forum Holitorium, the hands of his statue were positioned to signify the number 355 (the number of days in a lunar year), later 365, symbolically expressing his mastership over time. He presides over the concrete and abstract beginnings of the world, such as religion and the gods themselves, he too holds the access to Heaven and to other gods: this is the reason why men must invoke him first, regardless of the god they want to pray to or placate. He is the initiator of human life, of new historical ages, and financial enterprises: according to myth he was the first to mint coins and the as, first coin of the liberal series, bears his effigy on one face.

Janus frequently symbolized change and transitions such as the progress of past to future, from one condition to another, from one vision to another, and young people's growth to adulthood. He represented time, because he could see into the past with one face and into the future with the other. Hence, Janus was worshipped at the beginnings of the harvest and planting times, as well as at marriages, deaths and other beginnings. He represented the middle ground between barbarism and civilization, rural and urban space, youth and adulthood. Having jurisdiction over beginnings Janus had an intrinsic association with omens and auspices.

Janus was also involved in spatial transitions, presiding over home doors, city gates and boundaries. Numerous toponyms of places located at the boundary between the territory of two communities, especially Etrurians and Latins or Umbrians, are named after the god. The most notable instance is the Ianiculum which marked the access to Etruria from Rome. Since borders often coincided with rivers and the border of Rome (and other Italics) with Etruria was the Tiber, it has been argued that its crossing had a religious connotation; it would have involved a set of rigorous apotropaic practices and a devotional attitude. Janus would have originally regulated particularly the crossing of this sacred river through the pons sublicius. The name of the Iāniculum is not derived by that of the god, but from the abstract noun iānus, -us. Adams Holland opines it would have been originally the name of a small bridge connecting the Tiber Island (on which she supposes the first shrine of Janus stood) with the right bank of the river. However Janus was the protector of doors, gates and roadways in general, as is shown by his two symbols, the key and the staff. The key too was a sign that the traveller had come to a harbour or ford in peace in order to exchange his goods.

The rite of the bride's oiling the posts of the door of her new home with wolf fat at her arrival, though not mentioning Janus explicitly, is a rite of passage related to the ianua. 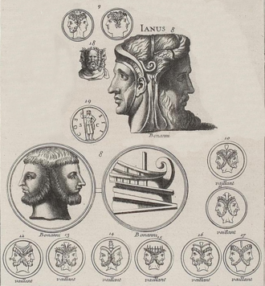